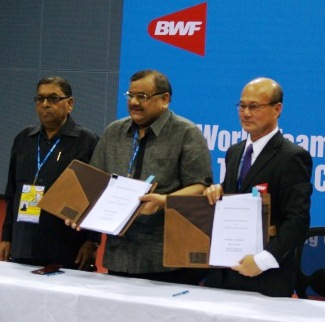 Badminton World Federation (BWF) and Badminton Association of India (BAI) have signed an agreement for New Delhi to host next year’s Thomas and Uber Cups – the first-ever time India will stage the event.

“Badminton is also developing at a rapid pace in India with many players making their mark on the international stage and we are happy to award the hosting rights to India.”

Das Gupta, the President of BAI, was confident of hosting a world-class event.

“I remember the first time we held the India Open, there were a few shortcomings. Now we are at a high level, we are confident that we can host any of the highest-level competitions.”

The Thomas and Uber Cups are the world men’s and women’s team championships. India has hosted the Asian Zone competitions a few times, but has never hosted the finals. The Thomas Cup began in 1948-49, and India was one of the few countries that were part of the inaugural tournament.