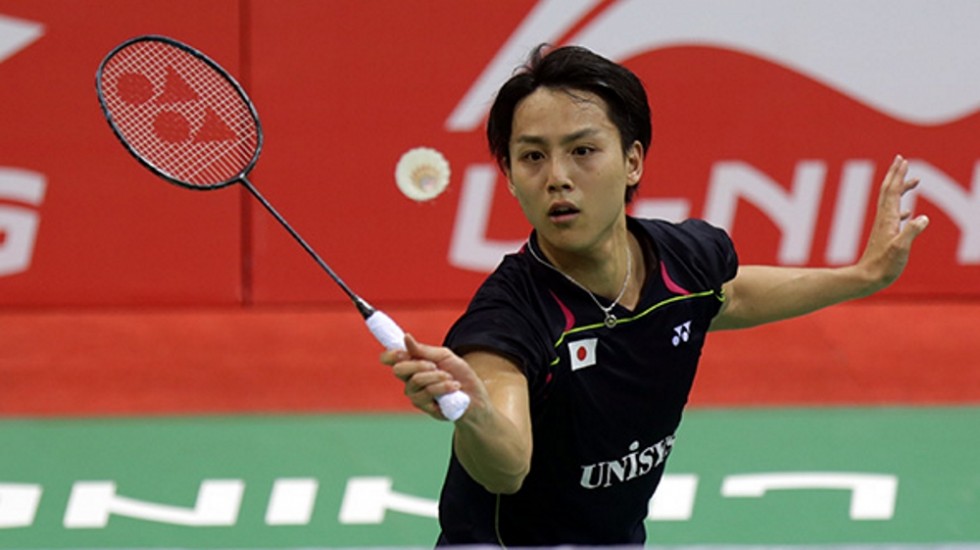 Takuma Ueda guided Japan to a thrilling 3-2 win over Denmark in Group B of the Li-Ning BWF Thomas & Uber Cup Finals 2014. The last group matches played out today with Hong Kong China beating England 3-2, also in Group B, while in the women’s section, China yet again registered a 5-0 result – this time over Chinese Taipei – in Group W while England emerged runners-up in the same group after beating Russia 4-1.

The Japan-Denmark tie was a high-intensity clash. Kenichi Tago struck first for Japan with a commanding show of pace and power over Jan O Jorgensen. The Japanese shot off to a big lead early in the match and never let it slip as Jorgensen struggled to contain his rival’s explosive bursts.

Keigo Sonoda and Takeshi Kamura might have fancied their chances against scratch combination Carsten Mogensen and Joachim Fischer Nielsen (above), but the Danes blew them

apart with a near-perfect display. With the adventurous Fischer constantly making forays at the net, and Mogensen firing smashes from the back, it was smooth sailing all the way for the Danes, 21-13 21-13.

Takuma Ueda (BWF home page) prevented a sticky situation for Japan by closing out his contest against Emil Holst in straight games, 21-13 22-20.

Mogensen said the partnership with Fischer had fallen into place. “I usually play with Mathias (Boe). Like him, Fischer is also left-handed. We’ve played together for many years in club in Denmark, so this is not new for us. We are good friends, so we think this is fun.”

Speaking of their different styles, Mogensen said: “Mathias is extremely good at serve-return and moving forward to net. Fischer is a different player, difficult to hit down to because he has a good defence.” Fischer, who is accomplished at Mixed Doubles with Christinna Pedersen, conceded that the Men’s Doubles required him to play a different style. “In Mixed Doubles I don’t go to the net that often. With Carsten, he’s very good from the baseline so I go forward a lot more. Today we found our level and showed how strong we can be. He’s one of the best in the world. He can play what he wants when he’s in the mood and that’s one of his strengths.”

England finished second in Uber Cup Group W after an authoritative performance over Russia. Ksenia Polikarpova won the second match to bring Russia level at 1-1, but it was downhill for Russia from there. Following Fontaine Mica Chapman’s victory in the opener, Panuga Riou, Gabrielle Adcock/Lauren Smith and Heather Olver/Kate Robertshaw (above) ensured a 4-1 score for England. The most exciting of these matches was the fifth match, which Olver/Robertshaw won after saving match point against Anastasia Chervaykova/Ekanerina Bolotova, 21-15 19-21 23-21. * Chinese Taipei’s campaign ended with a 0-5 rout at the hands of China. Except Pai Yu Po, none of the Taipei players could stretch the Chinese. Li Xuerui set the pace for China, shutting out Tai Tzu Ying 21-16 21-12 in 30 minutes. The rest of China’s formidable squad brooked no resistance. Pai Yu Po (right) took a game off Wang Yihan in the final match, but that’s about as far as she could go with Wang winning 18-21 21-17 21-11.