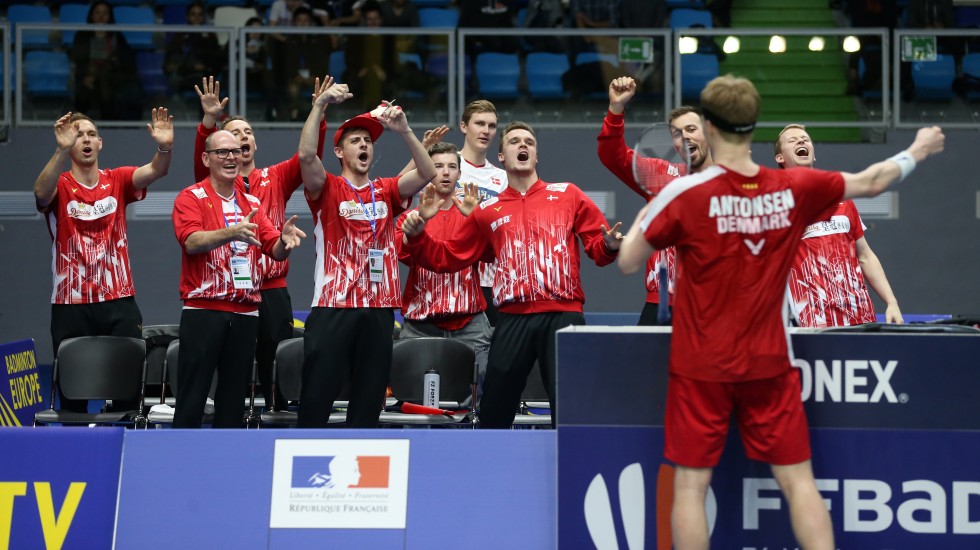 And it can simply be construed as a veiled warning to their TOTAL BWF Thomas Cup rivals.

The 22-year-old’s 21-11 21-14 victory over the Netherlands’ Joran Kweekel in the final in Lievin, France assured the Danes a comprehensive 3-0 win.

Viktor Axelsen had set the ball rolling by claiming his third success in as many matches over Mark Caljouw, winning 21-16 21-16 before Kim Astrup/Anders Skaarup Rasmussen saw off Jelle Maas/Robin Tabeling 21-13 21-11.

“We do very well in Denmark, and I am proud of my team and my country, and I am satisfied,” was Antonsen’s resounding message to Badminton Europe after his match.

Danish city Aarhus hosts the TOTAL BWF Thomas & Uber Cup Finals 2020 in May and based on Denmark’s performance in France, it would be difficult not to take Antonsen’s statement of intent seriously.

Not only did Denmark coast to title No.8, they also continued their remarkable unbeaten record at the tournament. And they did so without dropping a single game in the entire competition for the first time ever.

The women’s team added gloss to the success by triumphing 3-1 in the duel against Germany for their sixth continental team title.

“We are without any doubt the best team in Europe,” Antonsen exclaimed.

The fact the Finals are in Europe would make the 2016 champions strong favourites indeed, even against the Asian powerhouses, come May.

With the Continental Team Championships doubling up as the qualifiers, the Netherlands sealed their Thomas Cup place when they made the last four on 15 February and will be accompanied by fellow semifinalists Russia and France to Aarhus.

Twelve teams have confirmed their berths at the Thomas Cup while the Uber Cup has 11 qualified countries. The Egyptian women were the big winners in Africa, finally making it through after falling at the final hurdle twice in 2010 and 2016.  They topped the round robin standings by winning all their three matches. Scotland will also at long last get to compete at the Uber Cup tournament proper after finishing among the top four teams at the European Women’s Team Championships.

Four more Thomas Cup spots and the five remaining at the Uber Cup will be revealed when the BWF World Team Rankings are released on 18 February.