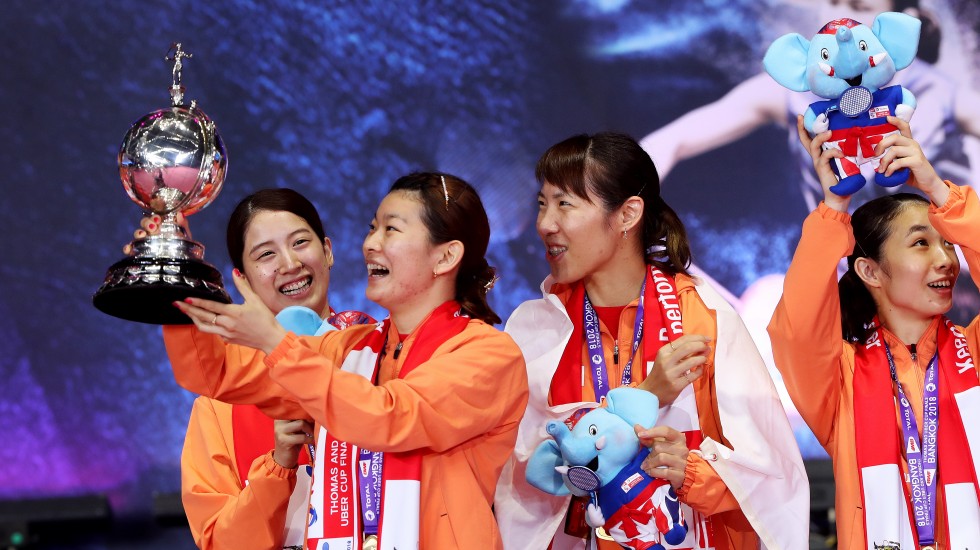 Japan's depth in singles and doubles helped them easily win the title.

Japan’s Uber Cup players of 2018 were not even born when the country last won the Uber Cup. Thirty-seven years had passed since that last triumph; in this period, China had become the dominant power, winning 14 of 17 editions.

Yet in the run-up to the 2018 edition, Japan had assiduously built a team that had depth in singles and doubles. Some of these players had featured in the 2014 final against China, and the team overall had sufficient big-match experience.

After a smooth passage through the group, Japan outgunned Chinese Taipei and Korea (both 3-1) before sweeping past hosts Thailand 3-0 in the final.

While Japan’s was a momentous triumph, the tie that caused the most ripples in the tournament was the semifinal between Thailand and China.

China’s last loss was in 2010; they had never failed to make the final.

What worked against them was inexperience. Their last generation of brilliant women’s singles players had mostly retired; the one remaining – Li Xue Rui – had suffered an injury at Rio 2016 and was far from her best.

Thailand thus leveraged their advantage in singles, with Ratchanok Intanon, Busanan Ongbamrungphan and Nitchaon Jindapol ensuring a 3-2 win over China – leading to emotional scenes in the packed stadium, and leaving the coaching staff and players in tears. It was Thailand’s first-ever ticket to a Uber Cup final.

Like China, Korea too banked on a new generation. With senior players like Chang Ye Na, Jung Kyung Eun and Kim Ha Na missing the event (Lee So Hee was also out with a back injury), Korea’s young guns acquitted themselves well. Teenagers Lee Yu Rim and Baek Ha Na were standouts, as was the then 16-year-old schoolgirl An Se Young.

*The Uber Cup saw the emergence of An Se Young, who won all her four matches. She proved her class under pressure by beating Line Christophersen in the critical fifth match against Denmark, helping Korea top Group C.

*India had arrived with an under-strength squad minus Pusarla V Sindhu, Ashwini Ponnappa and Sikki Reddy, and Canada took advantage to post a 4-1 victory in their group encounter.

*Indonesia prevailed in a close tie, 3-2, over Malaysia, with Gregoria Mariska Tunjung winning the crucial contest against Goh Jin Wei. Tunjung also shone in the final group tie against China, stopping Gao Fangjie 23-21 21-16 but she could not prevent China from topping the group.