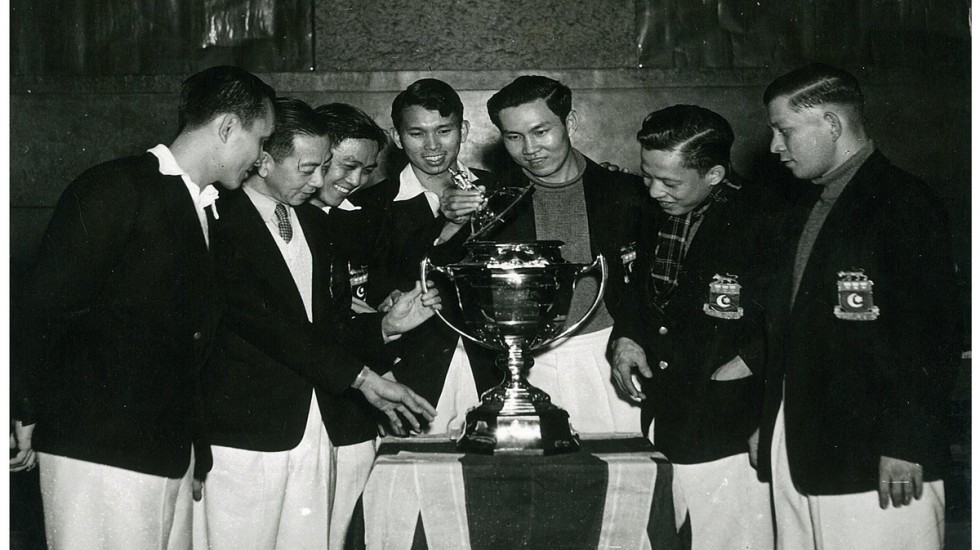 Members of the winning team marvel at the new Thomas Cup trophy.

The first ever Thomas Cup in 1949 came about at a time when Malaya – Malaysia’s name before 1963 – were a relative unknown in world badminton.

But that was a task Denmark – despite getting a bye straight into the final in Preston, England – could not accomplish.

Malaya, the sole Pacific Zone challengers who did not go through a qualifying round like their European and Pan American rivals, had already punched above their weight in beating the United States 6-3 in their semifinal duel just three days earlier in Glasgow, Scotland.

The Danes were ripped apart 8-1 in the nine-match final held over two days by a side led by the irrepressible Ooi Teik Hock, who stepped up to the plate following an injury to the team’s undisputed star man Wong Peng Soon.

At the first edition, teams were required to play five singles and four doubles matches – Ooi featured in four of them, winning all.

After Law Teik Hock had swept Danish champion Jorn Skaarup aside in the first singles, Ooi stepped up to defeat Mogens Felsby to give Malaya a 2-0 lead.

The Danes found no answer until the fifth match when Felsby beat Law in the third singles to give them a glimmer of hope.

But normal service quickly resumed, with Malaya taking the following four matches in comprehensive fashion. Ooi delivered the winning point in the very next clash against Skaarup.

Fittingly, it was him who played in the ninth match – with doubles partner Teoh Seng Khoon – and gave Malaya their final point.

The then 28-year-old had also earlier combined with Teoh in the first doubles to defeat Skaarup/Preben Dabelsteen.

Malaya’s dominant performance was unforeseen, but nevertheless impressive. It prompted the Preston crowd to rise to their feet to accord the first ever Thomas Cup winners a standing ovation.

After two days of action, team manager and non-playing skipper Lim Chuan Geok finally had the honour of being the first man to receive the newly minted silverware from Sir George himself.

And on that memorable 26th day of February, “The Little Men from the Far East” – as they were dubbed by the British press – stood the tallest on the podium.

They also became champions twice more, in 1967 and 1992, as the post-independence Malaysia.

But the once powerful Southeast Asian giants of the game are still waiting for their first title since lifting the hallowed trophy on home soil in 1992.