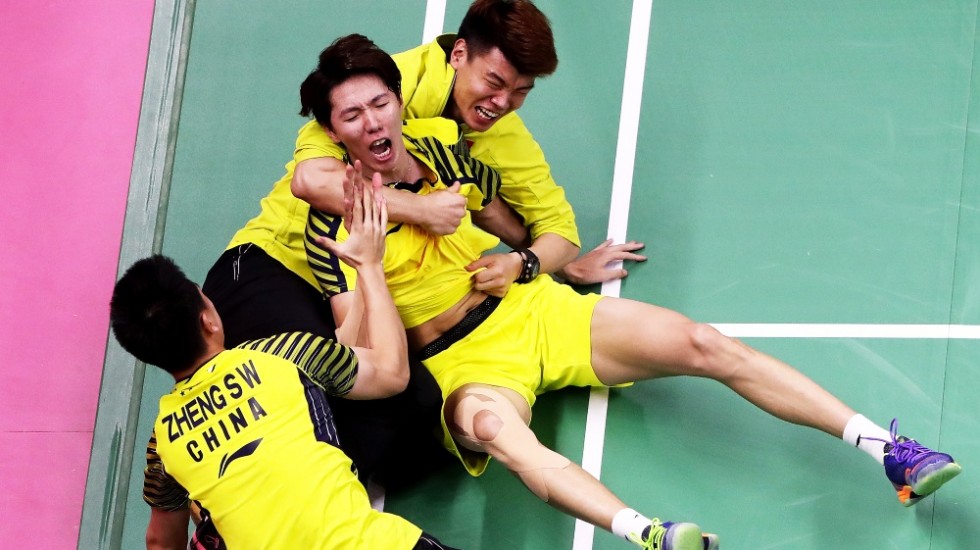 Further signs of team vulnerability came in 2017, when they were beaten in the final of the Sudirman Cup – the ultimate challenge of overall strength.

The omens weren’t good in Bangkok, for the Chinese women, who had won nine of the previous ten Uber Cup titles, were bounced out of the semifinals by hosts Thailand.

The Chinese men’s team had several young players – and it was the young component of the team that stood up well under pressure.

Shi Yu Qi, who had won the All England earlier that year, proved his reliability by winning all his matches – particularly the third match of the final to give China a 2-1 lead after Kento Momota provided the breakthrough for Japan beating Chen Long in the opening singles.

Similarly, Li Jun Hui and Liu Yu Chen also delivered for their team under pressure in perhaps the most thrilling match of the tournament, getting the better of Keigo Sonoda/Yuta Watanabe after saving two match points, and thus winning the Thomas Cup back for China.

Lin Dan, slotted for the final match against Kanta Tsuneyama, wasn’t required to take court. It was a victory delivered by the team’s young guns.

China’s young stars had earlier seen the team past Indonesia in the semifinals, with Shi Yu Qi and Li/Liu scoring critical wins over Jonatan Christie and Mohammad Ahsan/Hendra Setiawan respectively.

The other semifinal saw Japan’s three ‘K’s’ – Kento, Kenta and Kanta – outplay defending champions Denmark, proving the depth of their singles when their doubles pairs, rather unexpectedly, couldn’t pull their weight.

Japan’s campaign was powered by Kento Momota, who won each of his six matches, and continued with the form he showed after his return from suspension.

*Another icon also stood strong in what would be his last team event. Lee Chong Wei beat Vladimir Malkov, Viktor Axelsen and Anthony Ginting to take his team to the quarterfinals, but the rest of the team couldn’t match up to the occasion.

*Group C was reckoned to be the ‘group of death’, with Japan, Chinese Taipei, Hong Kong and Germany. While Germany did finish last in the group, they gave a good account of themselves, losing narrowly to Hong Kong 3-2, and taking a point off Japan (4-1).

*France did well to qualify for the quarterfinals, finishing second behind China in Group A, ahead of India and Australia. The French beat India 4-1 and Australia 5-0, before going down 3-1 to Japan.